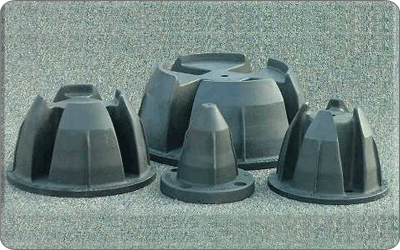 Powell Engineering Inc.’s Cast Grip™ tapered core chucks are available in single-core sizes from 3″ to 12″. The chucks have a large surface area to support the core and radial fins to transmit torque. The Cast Grip™ chucks have been found to perform better than any tapered chuck we’ve encountered. Core damage is minimized and core holding problems generally disappear. Many of our customers like a tapered core chuck because a tapered nose lets them open up and run crushed cores. In response to this we have included a tapered area forward of the core holding area. The chucks bolt directly to our standard adapter.